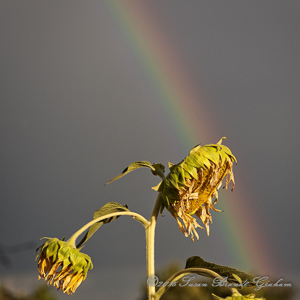 Monsoon light makes for some remarkable skies here in the high desert. The rain is always welcome. That is especially true this year, which has been very dry to this point. Monsoon season seems to have finally arrived, with heavy rain in some parts of Albuquerque two nights ago and an inch of rain at my house last night. Photographer friends here in Albuquerque remember the monsoon skies of 2009. 2016 may be remembered for its rainbows. Albuquerque has a reputation of sorts for its rainbows, especially the double ones. This has been a great year for rainbows!

Two nights ago I photographed a striking, although single, rainbow. I knew it would develop because of the special monsoon light that appeared as the clouds cleared from the west, with heavy clouds to the east. Anyone who has been here for any length of time and has watched the skies at all knows what this looks like.

7:17pm, MDT. Sun breaking through storm clouds to the west lit this little goldfinch and the branches of a neighbor’s tree dead from the prolonged drought. Heavy, dark clouds covered the mountains to the east. This is the set-up for a rainbow here in Albuquerque. The little spots are not dust on the sensor, but light reflecting off very light drizzle falling at the time.

By 7:25pm MDT a magnificent, full arc rainbow had completely developed, persisting for some time.

I chose this particular evening to focus on the interplay of the monsoon light with things I enjoy in my yard. The large sunflowers are almost ripe with seeds for the birds. This image seems to speak to people with a variety of different beliefs about the cycle of life, with the fading sunflowers that will soon provide nourishment for the birds, and the rainbow, a symbol of hope for people of many different beliefs.

Monsoon light – just one more reason I love living in the high desert of New Mexico. 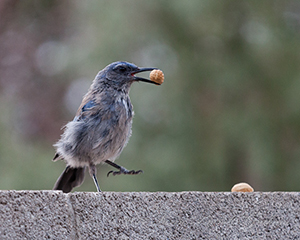 The official word is from the American Ornithologists Union. The two new species were originally lumped together as “Western scrub jay,” but for some time there has been talk of splitting that group. Small parts of Nevada see some overlap of the two, but beyond that location, location, location is everything.

Here in New Mexico, a scrub jay is Woodhouse’s scrub-jay. This makes identification easy for me. For my friends in Nevada…sorry.

I don’t want to mislead readers into thinking I discovered the species split while casually perusing the latest bulletin from the American Ornithologists Union (although I am sure I have friends who do). A great resource is Greg Gough at the Smithsonian Migratory Bird Center. I had talked with him a couple of years ago, and again just recently when I was working on Cooper’s Hawk Courtship Display. He sent me an email this morning advising me of the species split.

Another Woodhouse’s scrub-jay fledgling from a previous year, now with a a new species name:

My Cooper’s hawk book, Cooper’s Hawk Courtship Display, is now available at the Albuquerque Wild Birds Unlimited at 7200 Montgomery Blvd NE, 87109. I am very pleased that the paperback book is now available locally, not only because the Cooper’s hawks are found in large numbers here, but because this remarkable display took place in my very own back yard. Serendipity on a Sunday afternoon…

For interested friends and readers not in the Albuquerque area, Cooper’s Hawk Courtship Display is available in both Kindle and paperback formats at amazon.com:

I hope interested friends in the Albuquerque area will stop by Wild Birds Unlimited on Montgomery and support an Albuquerque business that is supporting local photographers and authors.

Individual prints from this Cooper’s hawk courtship display may be purchased at my portfolio site. 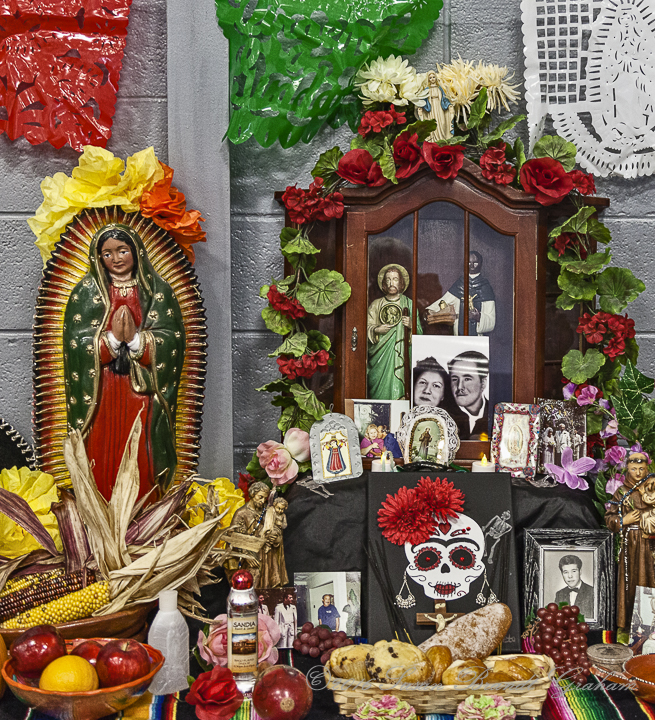 Day of the Dead Albuquerque Style. A Look Back at Some Previous Observances.

Day of the Dead Albuquerque Style will not happen in 2016 until early November. The Marigold Parade is Albuquerque’s major public observance of this ritual, which had it origins in Mexico long before the arrival of the Spaniards. The Marigold Parade is always enjoyable, and can be educational as well. Given that this is a Presidential election year, with all the politics surrounding this particular election, the 2016 observance in Albuquerque could be one of the best yet.

Day of the Dead celebrations have become popular in the American Southwest in recent years. Many of these have commercial appeal, and may have very little to do with the origins of the celebration or its function in maintaining cultural identity. To date, Albuquerque’s public celebration has avoided commercial ties, and has remained an expression of Albuquerque’s Hispanic culture.

Dia de los Muertos or Day of the Dead is not “Mexican Halloween,” nor All Saints Day or All Souls Day. Elements of Catholicism were incorporated into original native rituals when the Spaniards arrived. The day celebrates the return of the spirits of the deceased. This is not scary or frightening. It is cause for celebration. Preparations include laying out favorite foods of the departed, so that the spirits may enjoy the aromas. Favorite items are placed as offerings. Marigold petals are strewn in a path to show the spirits the way home. “Honoring the dead, loving the living” is a frequently heard phrase.

Preparations for the following year’s events begin almost as soon as the Parade is over. Plans and activities can be followed at Muertos y Marigolds. The 2016 Parade theme is “Sheep don’t vote, feed the chupacabra. ¡Reclamando nuestra querencia!” which definitely points to an emphasis on getting out the vote for the Presidential election two days later.

The first two volumes are now available in Kindle format at Amazon.

Many thanks to Lewis Baker who captured the both the meaning and the fun-loving spirit of the Marigold Parade in a jaw-dropping review of “Lowriders:”

The role of the Marigold flowers attached to the dramatic pneumatic Low and Slow dancing cars from earlier decades help lead the way home; and one imagines these hearty souls who once graced these shimmering desert highways with their canvas water bags dangling from doors and hood ornaments in these oldest models of cars find in this bouncing rebirth a joyful nostalgia for their human years in this Southwestern Land of Enchantment.

“Celebrating Life” should be out later this month or early in August.