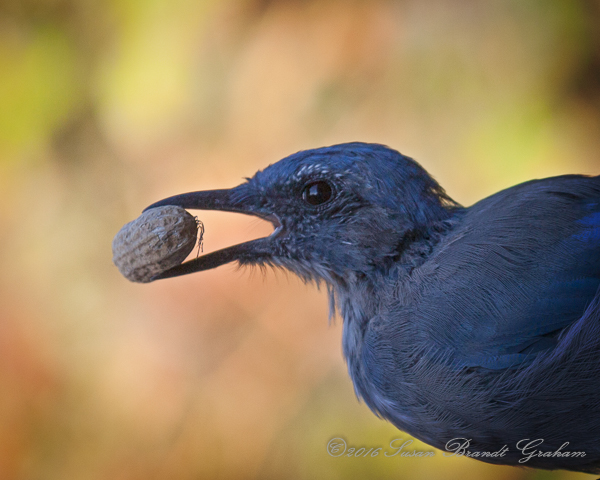 Fledglings are abundant here in late summer. They aren’t the cute babies just hatched, and they aren’t the beautiful birds they will become. They are awkward teens, developing some adult feathers but still with some baby fluff and coloration. I enjoy watching them grow. The scrub jays (now Woodhouse’s scrub-jays) are among my favorite, because they are here year around, and will eat peanuts on the patio table while I’m sitting there.

This fledgling Woodhouse’s scrub jay in the early morning light shows some of the beauty it will develop as it becomes adult.

These jays will come quite close for peanuts!

You know how beautiful adult robins can be. I’m not sure I had ever paid much attention to fledgling robins, but I had a great deal of empathy for this one!

A few days later I saw this one. I appeared much more majestic in the tree top, lit by the morning sun. I do not know if this were the same fledgling or not.

This fledgling house finch managed to look quite regal – to me – atop a sunflower seed head. He had already eaten a fair amount. He looked quite pleased with himself.

Crepuscular rays of light, “fingers of God,” and other names are beautiful atmospheric optics. August 2016 has been remarkable for their appearance over the Sandia Mountains. I’ve been able to photograph this phenomenon at sunrise twice in less than a week. Of note, many images on the internet were taken at sunset rather than sunrise, and the rays will appear pointing down. (The rays are actually parallel, but that is another discussion.)

This was the first. It was the most dramatic example I have personally ever seen.

This is the second. This sunrise was more typical. The rays and sky were “gentle.”

Phenomena like this do not last long. Within two minutes, the rays were almost gone.

Photographers in Albuquerque know the skies during monsoon season may present even more wonderful opportunities than usual. Many of us remember the summer of 2009 as being full of marvelous skies. This year, friends are capturing amazing images of the lightning storms we have had recently. Sunrises, which I have enjoyed for many years, are proving to be even more remarkable to me this monsoon season of 2016.

Edited to add: Added bonus: a rainbow to the west a little later in the morning!

Photographic Memories and the Joy in Finally Processing Old Files

Photographic memories are so wonderful. Maybe other people have photographic recall and never need old photographs to remind them of great times in their lives. I am really enjoying finding heretofore hidden treasures in photographs from the past that are just now getting processed.

Many of you who read here know that my mom and I have enjoyed many photographic outings with Tim and Laurie Price. I even met some of you through Tim’s blog. These images are from October 2014. I’m finally getting around to processing some of them. The images brought back memories of good times not only on this day, but of many other good times shared.

The next three are of Tim and Laurie:

Selfie reflection in a window:

Burro getting ready to work:

It was a wonderful October outing, and the photographs brought back so many memories of not only that day, but of so many days we have spent photographing together. The joy of photographic memories…