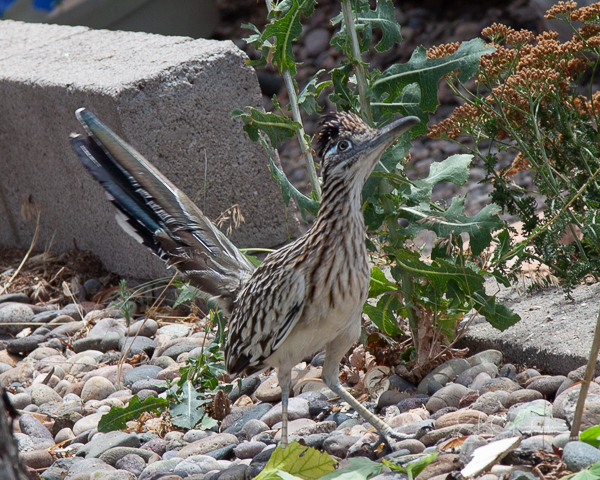 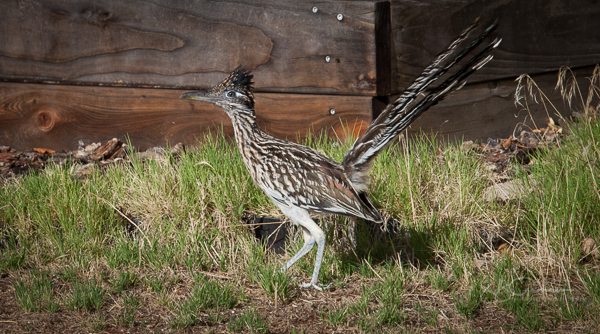 The Roadrunner, an Iconic Bird of the Desert

The roadrunner, a member of the cuckoo family, is the official Bird of the State of New Mexico. They are abundant even within the city of Albuquerque. They are regular visitors to my yard, using the ubiquitous block walls as superhighways. Unlike people, who seem to walk in the streets rather than on the sidewalks in this neighborhood, the roadrunners make great use of sidewalks and garden walls, and seem to be in the streets here only when crossing! They have smartly adapted to an urban environment.

One recent afternoon I caught sight of the young Cooper’s hawk just hanging out in what seems to have become one of its favorite spots in a pine tree, which does provide good cover for it. I was amazed that many little birds were at the feeders I provide, blissfully unaware of the presence of the hawk, who would soon be looking for dinner or an afternoon snack. I grabbed my camera and set out to photograph the hawk. As I usually do, I left the lens cap on, planning to remove it when I was settled into a chosen spot for photographing the hawk.

Silly me! I walked out the door, and about six feet to my right was a roadrunner with a hapless lizard hanging from its beak. Yes! Get that picture quick! Uh, no, remove the lens cap! In the time that took, the roadrunner swallowed it prey. Missed that one! But, the roadrunner did hang around for a few pictures before running off to another yard.

I went out to photograph a hawk hiding in a tree, and instead got a roadrunner in the open and in the light. Not a bad deal overall. 🙂

The Arizona Game and Fish Department has a nice video of roadrunners in that state: