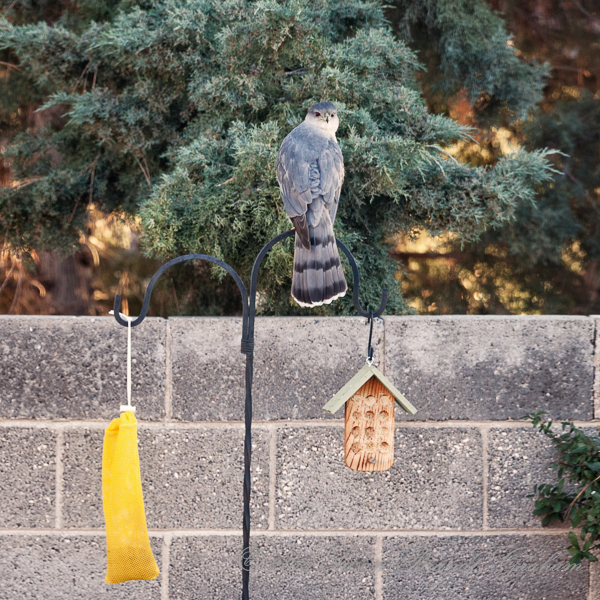 Cooper’s Hawk, at “The Restaurant”

Cooper’s hawks visit frequently. I have seen one in the yard each day for the past week. I like to see the hawks. They are magnificent birds. But, I don’t want my little birds to be a daily meal. I think it is time for me to take down these bird feeders for the little birds for a bit, until this Cooper’s Hawk stops coming by every afternoon.

This part of Albuquerque, with its “urban forests,” is home to a very dense population of Cooper’s hawks – as dense as in any of their natural habitats. They are very successful in this urban environment, partly because of people like me who attract their meals for them. The hawks have to eat, too, but I don’t have to make it too easy for them. 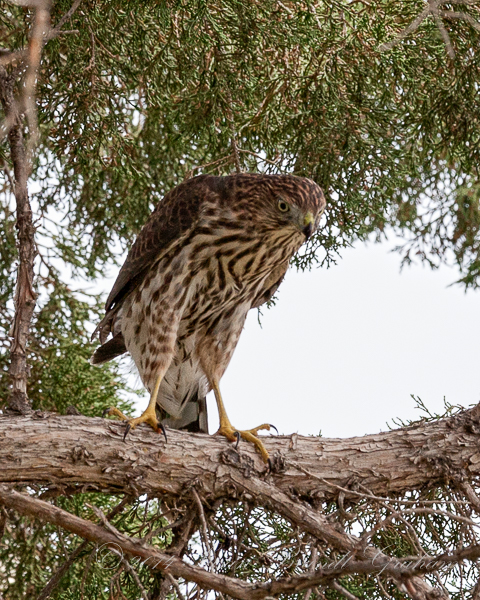 The Cooper’s Hawk that put on quite a display in August of 2014 and that drops by periodically was here again yesterday afternoon, looking for a meal. It was putting on a different show this time, flying all around a pyracantha bush in which a small bird was hiding. The hawk did not like diving into that pyracantha bush, and made multiple attempts, After trying, it would land back on the fence or on a tree branch, and then fly around and try to enter the bush again.

After many attempts, it finally just dived head long into the pyrancantha bush, which flushed out the little bird that had been seeking refuge there. As soon as the little bird flew out (it was probably either a sparrow, a junco, or a finch; I did not get a good look), the hawk caught it, and did exactly what these hawks are known to to. It squeezed the prey in its talons until the little bird became motionless. The hawk then flew off into the trees to enjoy its meal.

I did not have my camera handy at the kitchen window yesterday, so I simply watched the entire show from there. These images are from August, but this second shows clearly the typical way these hawks are known for treating their prey.

I live in a part of Albuquerque now known for its high concentration of Cooper’s hawks. From the Albuquerque Journal last year:

Cooper’s hawks are primarily woodland birds, and we have built an expansive urban forest across the Northeast Heights. The urban neighborhoods on the east side of the river are older, and therefore their trees are more mature, making them a better “forest” for the birds, Madden suggested.

This is a beautiful bird. I have come to accept that every now and then it will find a meal in my yard. Just so it doesn’t happen too often…