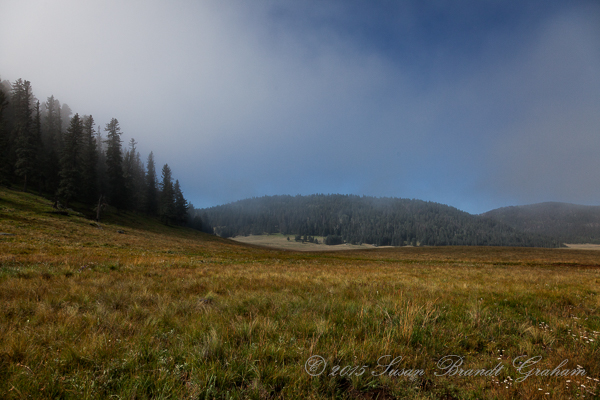 Fog in the Caldera

The Valles Caldera National Preserve is a national treasure in the heart of the Jemez Mountains of New Mexico. The caldera itself is a 13.7 mile wide volcanic caldera. The area has had many uses over the years, including ranching, movie set, and year-round recreational use now.

In 2013 we were fortunate to be able to purchase a pass for one day, which turned out to be the Autumnal Equinox, to drive through the caldera on designated roads at our leisure.

The day before, we encountered a heavy rainstorm right at the entrance to the caldera. So, I was expecting mud the following day. That night, though, there was a spectacular sunset viewed in all directions from Los Alamos, which sits on the edge of a mesa. Silly photographer – I did not have my camera with me at that moment, because we had gone out to dinner and my companions were a bit tired of being dragged hither and yon by someone with a camera. It was my own fault. I’ve learned the best images appear when I don’t have a camera with me. But, I do remember the vivid and amazing views at sunset that evening.

The following morning, we encountered a lot of fog in Los Alamos itself. Once we got to the edge of the caldera, we could see that the entire caldera was filled with fog. At that point, my companions were yelling at me to pull over and take a picture. Nice thought, but the heavy rains had resulted in some mudslides onto the highway, and road clearing equipment and men were out working to clear the highway. There was no safe place to stop.

The caldera of course, remained shrouded in fog as we entered the preserve and drove to the staging area to wait our turn. The fog began to lift just as we began our journey through the caldera. We were rerouted at some points because the roads had washed out the night before, and because of all the mud, I was glad I had all wheel drive.

The day itself was beautiful!

Here in New Mexico, we do not see fog too often. It lifted quickly that morning.

But, I hope this image gives you some idea of the beauty of the caldera, and its beauty with fog (and, our gorgeous blue skies, even with fog).