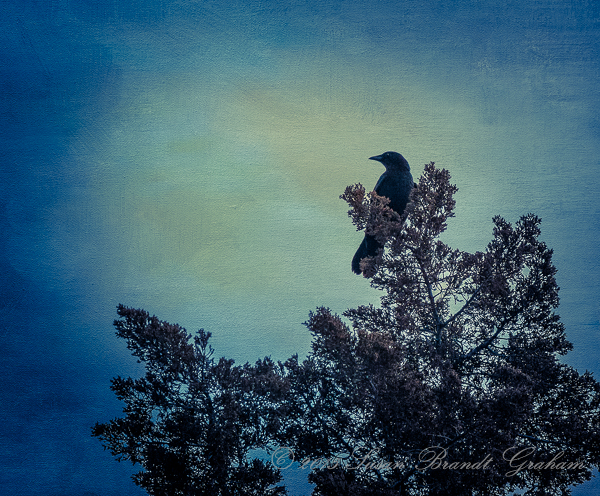 The crow in this image was the only photographically cooperative one in a flock that appeared briefly.

This afternoon I was out photographing a cloud bank rolling over the Sandia Mountains when a very noisy flock of crows arrived on the scene. Crows certainly do demand attention when they show up!

For a brief time they settled in a tree right next to the house, meaning I did not like any of the images of them from that point. But, when most flew off, this one settled at the top of an isolated juniper tree, allowing me to create a “crow portrait.” 🙂

It was a cold, wintery day, and snow is forecast overnight. I suspect it will come from the cloud bank rolling over the Sandias. West Texas has had winter storm warnings since Tuesday, and I suspect this is part of that same system. We’ve been lucky here (if you don’t like snow) or unlucky here (if you’ll take precipitation in any form because it is needed so badly here).

This weekend temperatures are forecast to warm into the 40’s F here. I would be very happy if we (or just the surrounding mountains, even) got a lot of snow overnight, because it would melt on the streets fairly quickly tomorrow, and yet we would have some additional precipitation.

In a different vein, the image and the day beckoned me to process this image in an exaggerated manner as a cold and wintery day in the Southwest!