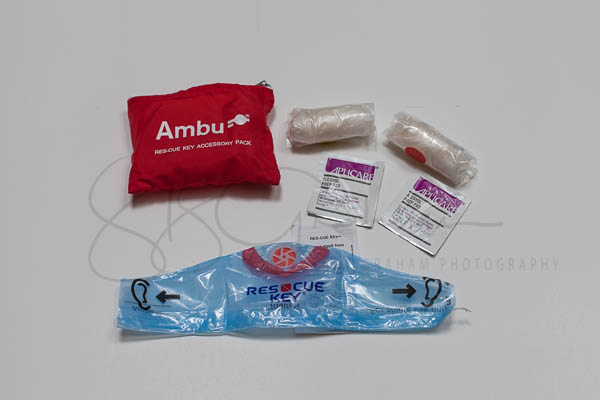 An Old CPR kit that I encountered while decluttering the house brought back a lot of memories. Cardiopulmonary resuscitation that consists of both chest compressions and artificial respiration is still the gold standard. However, around 2010, laypersons began receiving training in compression-only (hands-only or cardiocerebral resuscitation) CPR. This change came for several reasons. Studies showed that bystanders were more likely to assist if they did not have to do the artificial respiration part of CPR. Studies also showed that laypersons could achieve equal or better results with this than when both compressions and artificial respirations were attempted.

As a practicing physician I maintained certification in CPR as well as Advanced Cardiac Life Support. Since retiring, however, I had not given this a lot of thought. This week I came across a couple of these old CPR kits, which I kept on a key chain and in the dashboard of my car. These kits came into being after the beginning recognition of the AIDS epidemic. The purpose is to give some protection against exchange of body fluids in an outpatient setting.

When opened, the kit contains instructions for use of the covering for the mouth and how to place it; the mask itself with the short tube for artificial breathing; two alcohol wipes; and two pairs of gloves, large and medium.

CPR Without a Kit

I did not have one of these kits the first time I had to perform CPR “for real.” I was a resident with a one week vacation. My family and I went to the Grand Canyon. I had worked as a Ranger-Naturalist there for three summers more than a decade before. One thing I really wanted to do was drive out to the East Rim for sunrise at the Watchtower. As can happen with families, we were not all ready in time. So we drove to a point, close to where we were staying on the South Rim. The point was crowded. As soon as I headed for the point itself, one of the bus drivers was coming up the trail, asking Ïs there a doctor?” Ïs there a doctor?” I paused for about 30 seconds, waiting for a young male doctor to come running, Ï’m a doctor. I’m a doctor!” No one responded. I followed the bus driver. An elderly man was down, and a woman was checking for a pulse. She did not find a pulse. She was German and spoke little English, but was also a doctor. I spoke little German, but we both spoke “medicine.” Neither of us felt a pulse, and we began CPR. Even at the time I was amazed at how smoothly we worked together, trading spots when the one breathing tired. (Elevation at the South Rim is 7,000 feet above sea level.) We were an efficient team.

There were a lot of people standing around, but they all stood back and out of the way. At one point, someone handed me a clean handkerchief to place between the mouth of the man and my own. I always appreciated that.

My then-husband drove into Grand Canyon Village to try to rouse the Rangers. He ended up breaking a window to get in to use the call system (he had been a park Ranger at the time I had been a Ranger-Naturalist). I did not know until later how difficult it was to rouse help that morning. It took 45 minutes for help to arrive from the time the German doctor and I started CPR. Once you start, you cannot stop CPR until help arrives.

Help finally did arrive, and with it, a kit for intubation and an ambubag for ventilation. The German doctor reached for it, and the Park Service would not give it to her. I said, “we’re doctors.” That did not matter, the kit sat on the ground for about 2-5 minutes until the voice of a young male could be heard, Ï’m a doctor! I’m a doctor!” The Park Service allowed him to intubate the man, an ambulance arrived, and he rode with the man to the hospital. The woman German doctor and I just looked at each other. We were tired after 45 minutes of CPR at 7,000 feet.

How the Story Ended

As the EMTs were taking the man to the ambulance, his wife, who had been there all the time, came up and thanked us. They were from England, and he had had two prior heart attacks at sea level. He had left his nitroglycerin in the hotel room that morning. (I do not believe that would have made much difference, though.) I was very glad that the German doctor and I had been able to keep him pink for all that time, with his wife watching. At that point, that day, I believed the value of that CPR was a woman knowing that even though she was not in her own country, people helped when help was needed.

Chances for a good outcome for an unwitnessed third heart attack outside of a hospital setting are low. He was transported to the small local Grand Canyon Hospital and formally coded for 30 minutes, and then pronounced dead.

My personal belief is that feeling well enough after two prior heart attacks to undertake major travel, and then dying suddenly at sunrise at the Grand Canyon is not necessarily a bad way to go. Given any options, I might choose it for myself.

His wife is a different story. That is where my sympathy lies. I’m sure she had a lot of red tape and paperwork to get through before returning home with her husband’s body, to be with family and friends. To this day, I consider the gift of CPR to the wife from two unknown women doctors from different countries to be one of my finer moments in medicine.

After that experience, I obtained what is now an old CPR kit (and others through the years). I had one with me at all times, and each room in the office had one, although we also had ambubags in each room. Finding this old CPR kit certainly brought back some vivid memories, only one of which I have shared here. I probably won’t share more memories dredged up by an old CPR kit. However, I am finding other medical artifacts as I attempt to declutter the house, and I imagine I will have other stories. I also will probably obtain a new CPR kit to keep with me, in place of this old CPR kit!

To my regular readers, thank you for your patience! 🙂