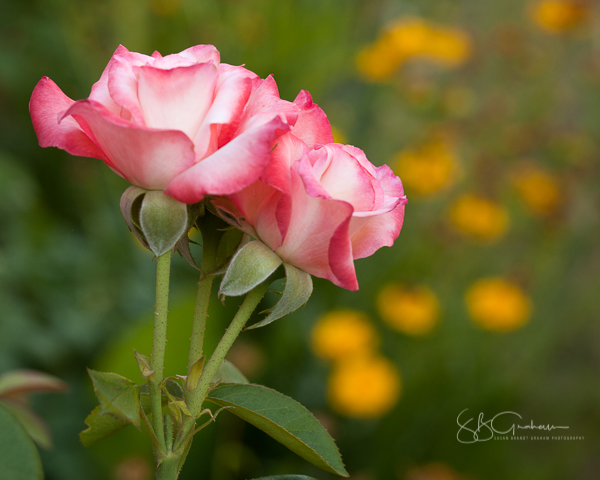 Rose sprays – the appearance of two or more blooms on a single stem – have been exceptionally abundant in my yard this year. After doing one draft of a PowerPoint presentation about photographing them, I decided I really needed to create two or three separate but related presentations. These would be for rosarians planning to enter their photographs in rose shows. But many of my photographs of roses do not meet the new ARS Guidelines (even though I helped write them, at least at the beginning), but would be quite acceptable in other venues. Sometimes I enjoy putting quotations with my images. That is what I felt like doing today. 🙂

This is a spray of the shrub rose, ‘Distant Drums.’ Those of you who know this rose know that these blooms are long past their prime, and lack many of the defining characteristics of the variety. But, the light was so glorious, illuminating them at early dawn.

And, I thought of this quote from Gabriel Garcia Marquez, Love in the Time of Cholera:

“Age has no reality except in the physical world. The essence of a human being is resistant to the passage of time. Our inner lives are eternal, which is to say that our spirits remain as youthful and vigorous as when we were in full bloom. Think of love as a state of grace, not the means to anything, but the alpha and omega. An end in itself.”

Several years ago I developed a habit of photographing a rose from “the back” as well as from “the front.” Those of you who aren’t into roses know that is really a meaningless distinction. In roses, “the front” most usually refers to what you would see in a rose catalog. That is because the American Rose Society was founded by rose hybridizers to encourage the sale of roses. Photographers, in contrast, look for interesting angles.

This image is of two different views of a spray of the hybrid tea rose, ‘Gemini’ with three florets. Visually, I prefer the one that would not be seen in a rose catalog.

I have enjoyed photographing the abundant rose sprays this year! 🙂 You can expect to see more over time. 😉