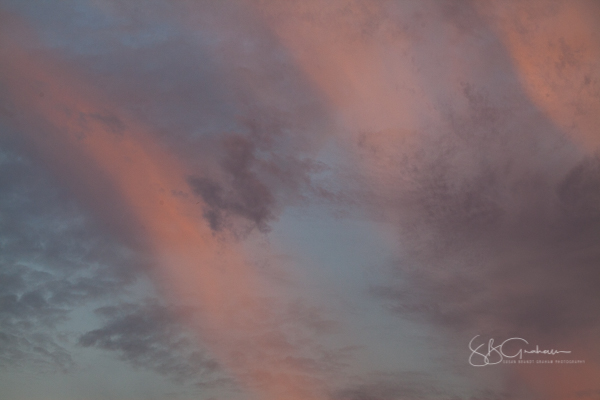 Anticrepuscular rays are a phenomenon that occurs opposite a rising or setting sun. I first became aware of them on the weekend of autumnal equinox, 2013. After dinner, looking down from Los Alamos across to Santa Fe and the Sangre de Cristo mountains was something I had never seen before, and it was spectacular! To the west were huge, roiling, golden clouds, remnants of a storm I had driven through earlier. They were also precursor to a new forming storm. But the view to the east was calm. The sky was blue, and soft pink rays seemed to emanate from the middle of the Sangre de Cristos. It was breathtaking. At the time I did not know what I was seeing, but I knew I was fortunate to be seeing it. Camera? It was in the motel.

Fast forward to Albuquerque, summer 2017. Those of you who read here often know that I have discovered how frequently crepuscular rays occur here. I just have to look for them. As an early riser, I can prepare for what looks like a promising sunrise long before it happens. I watch for it to develop, and have the camera with the right lens handy. One day I had “hit the wall” and overslept until 6:30am. Bright orange light coming through the blinds and curtains awakened me, heralding a colorful sunrise. By the time a sunrise is orange, it is almost over. I had no time to waste. Grabbing the camera, which still had a 100mm lens in place, I ran out. No time to change to a landscape lens, I thought. It should be more or less OK for the typical shot east from my back yard.

Then I turned and looked west. You never know what you might see. This is what I saw. I thought it was pretty, but I did not yet realize what I was looking at.

I went into the front yard to pick up the newspaper, and this is what I saw. Was I kicking myself for not changing the lens before I went out? Yes.

I returned to the back and took another shot looking west. Note how much lighter the sky has become. Total time elapsed from the first sunrise image to this last one? 5 minutes, 6:45am-6:50am.

More in the Future?

Many of you have seen the variety of crepuscular rays I have posted here. Now that I have seen anticrepuscualr rays here, I’m hoping that all it requires is an awareness to begin to see them more often. And, if not, well, I was fortunate to see them for a second time.