My Cooper’s hawk book, Cooper’s Hawk Courtship Display, is now available at the Albuquerque Wild Birds Unlimited at 7200 Montgomery Blvd NE, 87109. I am very pleased that the paperback book is now available locally, not only because the Cooper’s hawks are found in large numbers here, but because this remarkable display took place in my very own back yard. Serendipity on a Sunday afternoon…

For interested friends and readers not in the Albuquerque area, Cooper’s Hawk Courtship Display is available in both Kindle and paperback formats at amazon.com:

I hope interested friends in the Albuquerque area will stop by Wild Birds Unlimited on Montgomery and support an Albuquerque business that is supporting local photographers and authors.

Individual prints from this Cooper’s hawk courtship display may be purchased at my portfolio site.

Cooper’s Hawk Courtship Display is now available at Amazon in a Kindle version. A paperback edition is also coming.

Can be read on most devices with the free Kindle app. (See end of post for link.)

The volume contains 32 images taken on August 3, 2014. At the time, I knew I had witnessed something remarkable. I knew it was a very intense encounter. Initially, I took it to be some type of territorial display.

This spring, after doing some reading and going back through the images, I came to realize it was something quite different. The behavior is described in the literature, but this on the ground (more precisely, in the trees) display is not well documented photographically.

The encounter with this beautiful young hawk was serendipitous. The display was something I knew nothing about until I saw it that day, and it was almost two years later before I grasped its meaning and the insights it gave into the life of a male Cooper’s hawk.

In the past couple of years I have had the opportunity to see and to photograph some rather amazing events that I will remember for the rest of my life – the Blood Red Total Lunar Eclipse of September 2015; the Alignment of Jupiter and Venus in the early morning hours of 2015; and I would add this hawk encounter to that list of things that became important to me as observations of life.

Courtship display did not even enter my head as I photographed this young Cooper’s hawk putting on some kind of display in a large juniper tree in my neighbor’s back yard. I knew I had never seen anything quite like it, and I felt very lucky to have photographed it. I posted some of the images some time ago, and then things in my life got busy. Then they got even busier.

At the moment, I am still busy, but, at least temporarily, things seem somewhat stable. 2016 has started off great in terms of productivity with photography and photo essays. Color vision is my current passionate interest. In working on that, however, I came across the images of the hawk display. Over time I have come to realize what that display was: a courtship display. This behavior is described in the literature, but photographic documentation is scarce. I decided to take a little break from the color vision, and publish the images, both in paperback format and Kindle format. This is the first volume in a series, “As Seen in New Mexico…”

“Cooper’s Hawk Courtship Display” will be available in both formats at Amazon some time in June (mid-to-late). I’ll post when they are available at my Amazon page.

This is the Kindle cover, as well as the front cover for the paperback:

Was this young male just confused, or was there method in his madness??? Stay tuned… 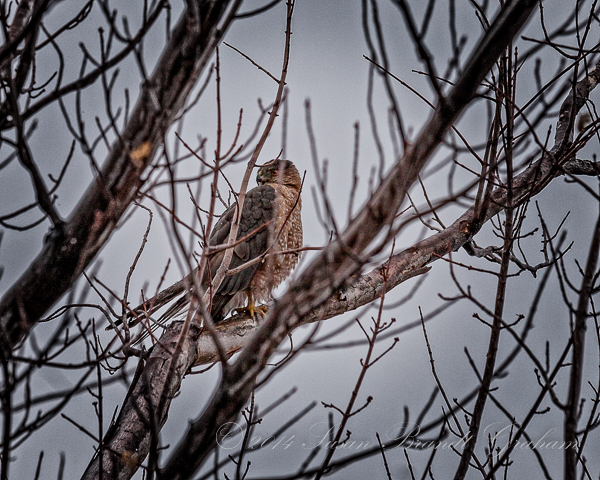 It was a cold, wet morning in Albuquerque.

This Cooper’s Hawk has been a regular visitor since August. It usually moves around a lot, often flying in for a meal and leaving when it is finished eating.

It was hunkered down like this when I first saw it on this day, and it stayed for about three hours. (It must have had its breakfast before settling down in that tree).

Other than keeping a watchful eye on me when I was photographing it, it did not appear disturbed by my presence. 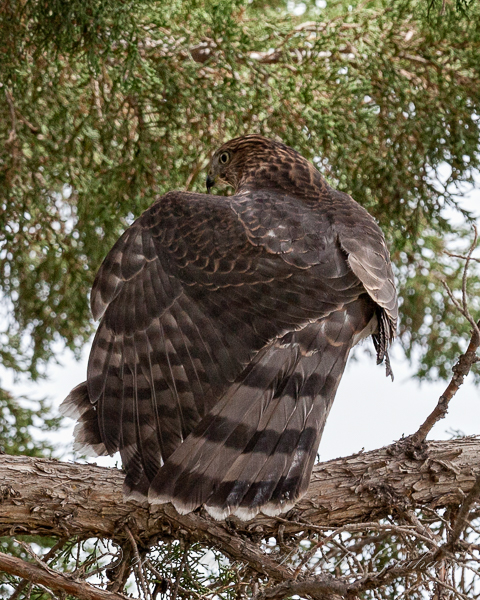 This weekend, I had the opportunity to observe and photograph an immature Cooper’s hawk for almost an hour. I was very fortunate in actually seeing it fly into a juniper tree, where it was quite well hidden. I would not have seen it, had I not seen it fly in.

Over the years, I have seen this and other hawks in the neighborhood. This is the longest time, however, I have had the opportunity to be “up close and personal” in such an intimate way with any wild animal, bird or otherwise. I knew at the time I had seen something extraordinary. Later, processing the images over several days, I saw many things I had not “seen” at the time. I have evolved from finding this an “interesting’ encounter to developing a tremendous amount of respect for this young hawk. This slide show contains many images from the encounter; some better than others. I include so many in hopes of sharing the depth of my encounter with this bird and its with me.

Albuquerque seems to be an ideal spot for the Cooper’s Hawk! I do indeed live in an “urban forest” area, and my own yard could be described as such. I feed many small birds at a variety of feeders, an enjoy seeing them daily and as they change seasonally.

I had accidentally seen this hawk fly into the tree. When I heard my scrub jays going nuts, I was concerned about a little fledgling scrub jay I have been attempting to encourage to come closer by feeding peanuts when I was out. I had been out and taken a few images, but the bird was hidden enough I did not try for more, initially. But, when I heard the jays, I thought if I went out, perhaps the hawk would fly someplace else for dinner that particular day. I took my camera, although I thought good images would not be possible.

The hawk had moved to a much better spot for photography. Still concerned about the fledgling jay, and with the hawk showing no signs of leaving, I decided to keep moving closer and closer. When I got close enough, this hawk put on an amazing display, which I interpreted (and still do) as a challenge to me. It was beautiful and mesmerizing; I had never seen anything like it. It seemed to go on forever, and I kept photographing. In reality, the entire display lasted 18 seconds!!!

Study on Cooper’s hawks in Albuquerque