“My Path, a Self Portrait” is not typical of my portrait work, either for self or others. It started as a selfie on a cell phone and ended as a heavily edited portrait. It came into being as I was learning just what technologies for photo editing I had on my phone and how to use them. As it emerged I did not like it. I had planned to delete it when I was through playing with it. Fortunately, I got tired and went to bed that night.

Some of you are familiar with the Persephone Series a few years ago. A few of you may be familiar with the series, Pain Management 2020. When I create images like that from photographs I cannot always explain why I used a particular element and so forth. It “just seemed right” at the time I was doing it. I have come to believe that is the subconscious speaking, which may be why creating things is so therapeutic. Over time I often come to understand why I did something. I usually learn something about myself.

All of us share to some degree a universal trauma from the Covid-19 pandemic, even though our experiences have been different and unique. For each of us there are subplots to that story. For me, lockdown in 2020 made my life so much easier than it had been in 2019. All of 2019 was difficult, but especially from July through the remainder of the year. 2020 brought an improvement to my life, and a much needed rest. Both years had experiences that I consider transformative.

Now, in the summer of 2021, we continue to face unknowns about Covid and its variants. In spite of that, there are pressures to get back “to normal,” defined by some as what things were like in 2019. Although that is not want I want for my life, at times I still feel pressure.

I was feeling a lot of push and pull when I began playing with a selfie to learn some editing techniques available on my cell phone. I wasn’t creating an image to solve a problem; at least I did not think I was.

When I got up the next morning, the image didn’t seem quite as ugly as it had the night before. That is when I began to see the path, my path.

I created this image on July 3, 2021. It will be shown in Pennsylvania Center for Photography’s Transformations show in New Hope, PA August 13 – September 6, 2021. 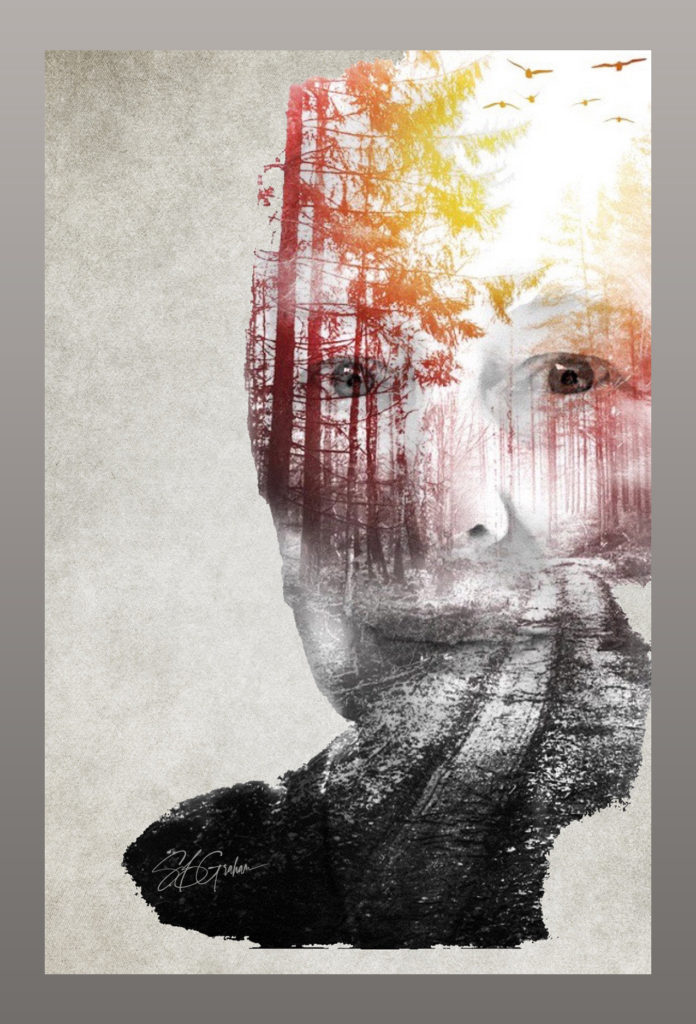 Persephone, Goddess of Spring, Queen of the Underworld and Wife of Hades

Persephone, in Greek mythology the Goddess of Spring, daughter of Zeus and Demeter, Goddess of the Earth, Harvest, and Fertility, became also the wife of Hades and Queen of the Underworld. She was abducted by Hades, with the permission of Zeus, to be his wife. Demeter, in her anger and grief at the loss of her daughter, caused the Earth to be barren, the crops to fail, and winter to fall upon the earth.

That much most versions of the myth agree upon. Beyond that, however, are many plots and subplots, twists and turns, allowing for varying interpretations.

This seems like a good time to introduce Persephone in her role as Queen of the Underworld and wife of Hades. Although we are not yet officially in winter, here in the Northern Hemisphere we are in the dark, short days and long, cold nights, and rapidly approaching the Winter Solstice.

If a picture is worth a thousand words, it is nevertheless true that sometimes a few words can produce a thousand – well, maybe a few – images. Frequent readers here are aware of references to writer and fellow anthropologist, Jim Stallings, and his poem for “The Observer/The Observed.” Jim and I graduated from high school together, but were not aware of each other until a couple of years ago or that we both held a PhD in anthropology. We wouldn’t know each other walking down the street. But by virtue of the training in anthropology, we share a common vocabulary, even though our lives are otherwise quite different. We both are aware of the French structuralist Claude Levi-Strauss and the deconstruction of myth through binary oppositions. As a grad student, I wrote a paper, “A Structural Analysis of a White Mountain Apache Creation Myth.” While I did not use that much as an Ob/Gyn, that kind of knowledge sticks around and contributes to one’s view of the world and life. On September 15 of this year, Jim noted the approaching Autumn with “…it is that ancient mythic time for the daughter Persephone of the Earth Goddess Demeter to return to the Underworld and stay there until the return for Spring.”

As much as I hate to admit it, I was not familiar with Persephone. I had to go read. As I read more and more, however, her story resonated with me. Within a very short period of time I created three images from some of my favorite subjects, sunflowers and butterflies, that told a story of descent into darkness and emergence from it. Those images can be seen at the 2015 ANMPAS show opening on December 6 and running through December 28. I knew at that point that Persephone’s story was so rich and so complex that I wanted to tell her story through photography, with a real person (or persons), but it took me a bit to figure out how I wanted to do that.

In this image, you see Persephone with a pomegranate, held almost as a royal orb. The pomegranate plays a major supporting role in Persephone’s story, and is symbolic of many things. This will be explored in detail in future images posted here. By unplanned good luck, I had the opportunity to photograph many different pomegranates this fall, and they will be incorporated into some of the Persephone images. At the time I began photographing them, I wasn’t certain what I was going to do with them; I just knew I had to have them.

I had planned to photograph Kelly, “Persephone,” in black, but she requested some red as well. I had thought the black would be perfect for the time in the dark underworld. There are images in black, and you will see some of those. When I was doing maternity portraits, I always went with what the clients thought would be best for them. I now add, “trust your model” to things I have learned as a photographer.

This is an introduction to Persephone, and sets the stage for a coming series of images that explore that particular myth…and maybe more.

Life, Day 1 – is there anything more beautiful or more giving of hope than a brand new baby?

Last week I had the honor to photograph this tiny, beautiful baby in the morning after birth the evening before. It has been some years since I last delivered a baby, but the thrill of new life will be with me forever. Photographing newborns is as satisfying in its own way as delivering them.

I have known the new mother (and new grandmother) for many years, and that bond may have made the opportunity to photograph this particular newborn even more special. This child was born into a family in which it will receive every opportunity to maximize its potential. And I think it is the potential of all newborns that gives hope to the world.

For that reason, all newborn babies are special. Life, Day 1 is the beginning for any baby. Mothers on Day 1 may feel more like this represents the end of a pregnancy (often with some relief), but within a short amount of time mothers, fathers, grandparents, and others realize how fast the new addition is growing and changing. Newborn portraits record a very special time in an entire family’s life.

I am once again doing, on a limited, custom basis, maternity, newborn, and family portraits. If you are interested, you may find more information about custom portraiture at Albuquerque Maternity Portraits.

If you would like more information, or to discuss an appointment, you may contact me using this form.

Thank you for your interest.