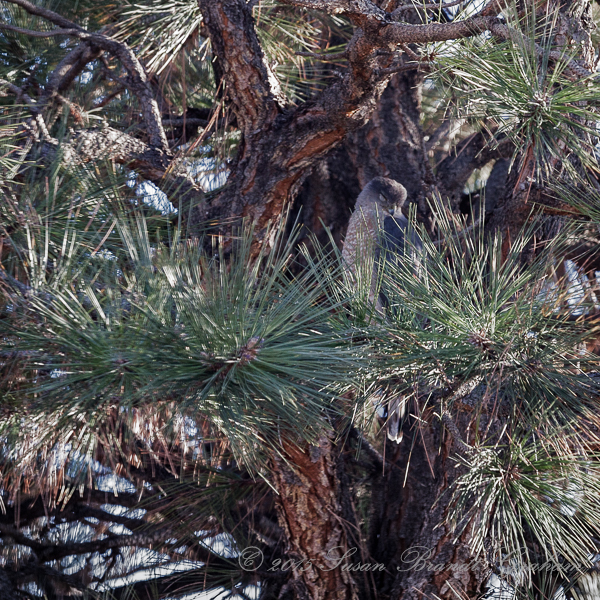 The Hawk of Albuquerque’s “Urban Forests”

Hawk, hanging out in the pine tree outside my kitchen window – can you spot it?
(This could make a jig saw puzzle. 😉 )

As I have said here before, the density of the Cooper’s hawk in the “urban forests” of Albuquerque’s Northeast Heights is thought to be as high as in any of this hawk’s “natural environments.” It has adapted well to life with humans. After all, we put out birdseed and other food for the little birds, and the hawks seem to appreciate our efforts and to thrive.

This is a large pine tree in my back yard, and I know that white-winged doves and scrub jays have had nests in that tree over the years. I always look forward to the fledgling jays (later in the year), and I am not overjoyed that the hawk is now using this as a hiding spot to wait for prey.

I was washing dishes when I caught sight of the hawk napping in the tree. It did not seem to mind being photographed as long as I was in the kitchen, but it flew when I went out.

Given the frequency with which I am seeing hawks in my yard this year, I expect other photographic opportunities for them. I’m not so sure about little fledglings of other birds later on, though…

This hawk is more mature than the one photographed in August and whose images I posted a few days ago. That was a juvenile Cooper’s. I do not know that this is the same hawk, just more mature and with plumage reflecting that. As many hawks as are known to be in this area, it could be a different hawk, of course. But, I want to think it is the same hawk that has been hanging around. 🙂

Although it is a bird of prey, the Cooper’s hawk is a beautiful bird of which I have become quite fond.

2 Replies to “Spot the Hawk”