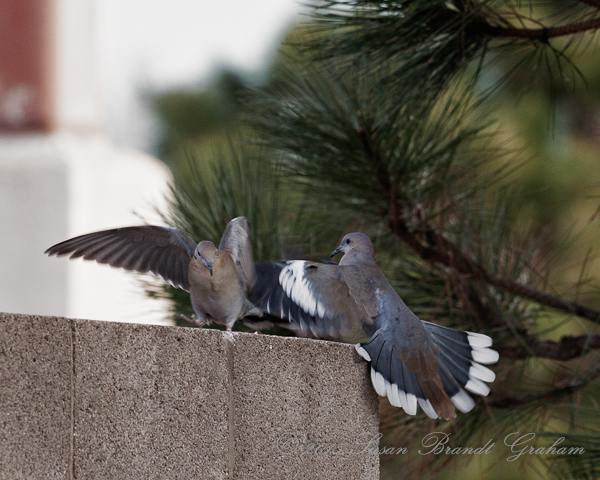 Peaceful Doves? Not When Territory Is an Issue!

Doves are generally thought of as peaceful creatures. And, in some ways, and most of the time, they are. They seem to spend all their waking hours eating and making more doves. The white winged dove did not have much of a presence when I first moved to Albuquerque, and now they are everywhere. I rarely see a mourning dove these days, which was the more common dove when I first arrived.

I photographed these white winged doves during the Great Backyard Bird Count last weekend. I was kind of glad they put on a show.

At first glance, you might think these two look peaceful enough. But, note the raised wing of warning!

And then, a full blown warning:

That was followed by a real attack:

Then, the two began to settle down gradually. A little later they returned to ground feeding, as if nothing had happened.

They gave me something beyond the usual to photograph. 🙂