Seeing color is something that those of us with normal color vision take for granted. But many people do not see the range of colors seen by most people. “Colorblind” has been applied to such people, people with a color deficiency. As my son has said,

“‘colorblind’ as a term is sort of a misnomer in that even extremely colorblind people see colors – they just see them differently than people who are not colorblind. Unfortunately, many people are ignorant regarding this.”

Although I knew they both had the same “red-green” colorblindness, until quite recently I really had no idea exactly how they saw the world. It just was, and nothing could be done about it. All of that changed in March of 2015, when Enchroma posted a video on YouTube:

I must have watched that video 20 times in a row the first time I saw it. I had such hope my son could see the world as I saw it. In short order, his grandmother had ordered a pair of Enchroma glasses for him. Here is a description of how these glasses work to help colorblind people see color. My son did not get the “wow” effect from his glasses, but he likes them. He wears them as sunglasses on his daily commutes and other trips. On one trip, he commented that he saw pink in a sunset for the first time ever. So, they do make some difference, but it took a little while for that to come out.

After hoping so much that he could see color the way I do, I had to accept that was not likely to happen in the near future. And for the first time ever, I began to wonder if there were any way that maybe I could see his world. Now it seems odd to me that it took me a lifetime to ask that question, but there it was.

I thought about it for several months, and gradually some possibilities occurred to me. In my digital photography program I had become acquainted with the RGB (red-green-blue) color system. I was also aware of some beautiful old Russian images done in color by shooting three black and white images in rapid succession, using red, green, and blue filters, and then combining the images into one. Those still amaze me. By Sergey Prokudin-Gorsky – from the Library of Congress’ website, Public Domain:

The more I thought about some of those different things, I began to play with RGB channels. In the spring/summer of 2015 I made three sets of images, each set containing an image as I saw it, and another image as I thought my son might possibly see it, based on what I knew about his color deficiency by that point in time. I knew that in theory the two images in each set should appear the same to him. But, I was very, very surprised when they actually did!! I was happy that I finally had a glimpse into his world, and sad that I did not have the technology to show him mine.

Then, I got very busy with many things, and did not work on more sets until early this year (2016). I’ve done a fair number of these diptychs now, with my son giving me a lot of time to go over them. My father had and my son has a red color deficiency, rather severe. People with a different color deficiency, or a different degree, would not see these images in the same way at all.

Before I show some of the diptychs, I want to show this image of the color wheel for the RGB system of additive light. As you look at it, try to imagine what you might see if red were missing or almost missing. You might want to refer back to it if some of the sets puzzle you.

Thanks to Wikimedia Commons for this public domain image of the RGB system of additive light. 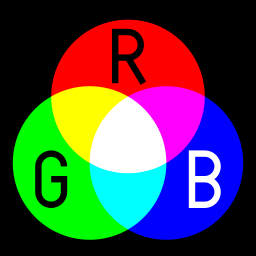 Things We See Not Too Differently

Big Surprise: Skin Tones
In retrospect I should have anticipated skin tones, but it took me a little while to accept how I look to my son.

Another Big Surprise: Monotones and Black and White

This is Bishop’s Cap, and the color on the left is just the way it occurred naturally.

For these in black and white, if the cyan tone surprises you (it certainly did me, initially), you might want to refer back to the RGB color wheel of additive light, and imagine if the red is not there what would be left. White, black, and true grays have equal amounts of red, green, and blue. With no or little red, you get a combination of blue and green, which equals cyan.

I definitely prefer these developing pears the way my son sees the black and white image:

I included this image, although it is not a very good one, for a specific reason. Color deficiencies at times can have some adaptive benefits. Colorblind people were used in WWII (and I have heard also Vietnam, but I do not know that for a fact) to detect the enemy through camouflage. I am not certain if it was for color, per se, or that they could detect movements better than people distracted by lots of color. There has been speculation that among our big game hunting ancestors, colorblind males might also have been better able to detect movements of animals, giving them an advantage over those with normal color vision. When my son was in Oklahoma working on his degree in Boot and Saddle Making, the FAA called him frequently for tests for projects they were working on. I don’t know any of the details, but my son said they were working to improve safety (this was in the 1990’s, long before 9/11, just for clarification). Color deficiency can have some adaptive advantages.

A Final Video and Thought:

“Sometimes I wish people could see what I saw…” Andrew from this Enchroma video:

I have never heard my son say, “I wish people could see what I see.” But he has certainly given me a lot of time and help as I have worked on this project, something I felt compelled to try once the idea popped into my head and I realized I had learned tools in photography that might allow me to see the world through his eyes.

This project is far from finished, even in working with the one specific type and degree of color deficiency. Over time I hope to work with other types of color deficiency as well. But should I never get any farther with this, I am happy that at this stage of my life I have learned to see the world through the eyes of my son (and thus, also, my father). Although the technology does not currently exist for him to see the world through my eyes, I have hopes that will happen some time in his lifetime.

That’s what you get from a mother, a daughter, a PhD anthropologist, a board-certified Ob/Gyn, and photographer. 🙂

If anyone has read this far, or even looked at all of the images, thank you!