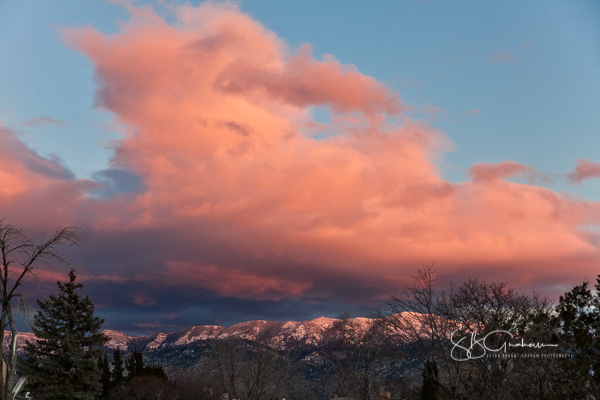 Sunset, snow, mountains: compare this sunset over the Sandia Mountains less than 36 hours after the very fiery sunrise in the previous post.

Late afternoon was cold and very windy. But the image appears calm – at least to me – compared to the fiery sunrise. The weather that morning was relatively calm (on the ground) and warm. I also watched this one as it developed, and had my camera and coat ready. I felt cold only when I was back in the house. This view, like most of those shown here, is from my back yard. 5:30pm. I see an old man with a Pinocchio nose in the cloud. Do you?

I rarely show photographs from the front yard, because the view is of a street of houses, driveways, and parked vehicles. Every now and then, though, I have to try because something special cannot be ignored. This is the same sunset looking east to the Sandias at sunset. This is toward the north end of the Sandias, with the collection of towers. 5:29pm.

This week is one of wind, along with cold compared to the winter we had had so far. But, I am not complaining, because the weather has brought the kind of sunrises and sunsets I love. 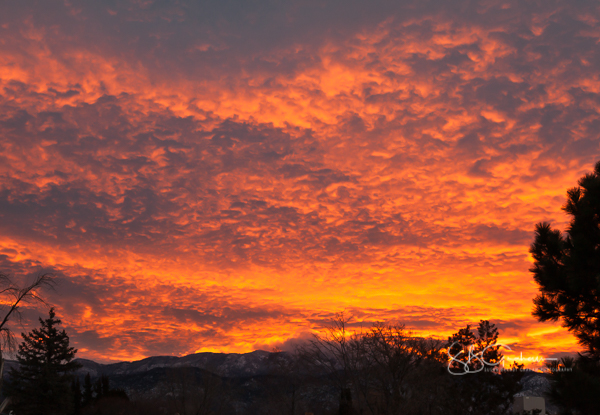 This is the kind of sunrise photographers anticipate, wait for, and photograph quickly when it does materialize because sunrises like this will not last long. I stood, looking out, with camera on hand and set for my usual sunrise settings, for about 15 minutes. When the color appeared, I started photographing at 7:02am. I stopped at 7:10am. This image is from 7:07am.

More stormy weather is on the way, and it is already windy. But the sunrise was worth being up for. 🙂 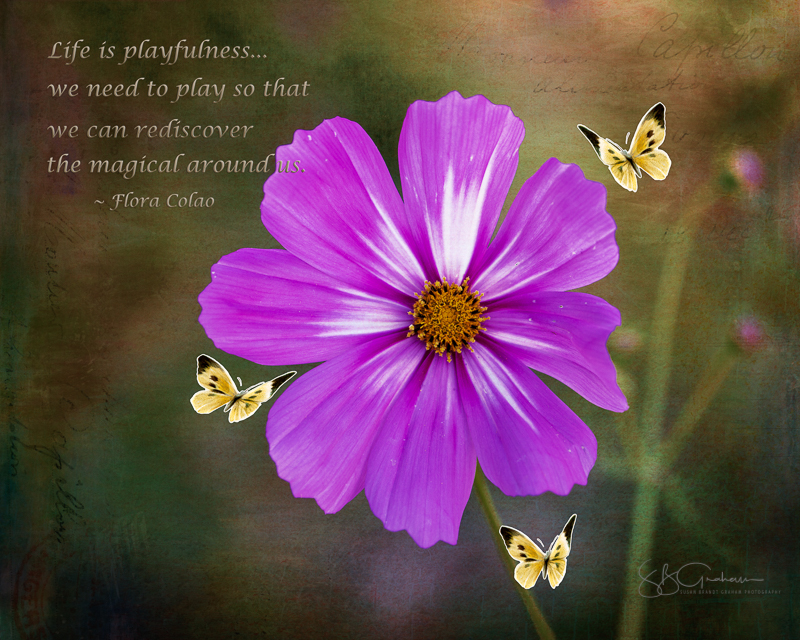 Playfulness – what is it and why should anyone care? Most commonly associated with children, playfulness in adults has been more recently studied by researchers.

We often think of children when we think of play. But being able to play may be what makes some people happier than others. The ability to play as an adult, as defined the above-referenced article, seems to be innate rather than learned. But even people who are able to enjoy being in their own heads, imagining and seeing the magical aspects of life, may not be able to do it all of the time.

Photography is one outlet for play for me at this time. Creating images of my world is fun. At this time last year I was engrossed with the Persephone series. Looking back through those images now, this is a composite of many aspects of my life. It is only in retrospect that I see it that way. It occurred to me when I came across the Frida Kahlo quote about her painting:
“I don’t paint dreams or nightmares, I paint my own reality.”

I guess this is mine:

Some winters I find it harder than others to feel like playing. Winters are always the worst, and some are worse than others. But here in New Mexico, even sunsets in winter can seem to offer some hope of a better tomorrow.

If all else fails, a look back at the 2016 Albuquerque Balloon Fiesta can reveal a playfulness that appeals to all ages, children and adults.

Wishing you a day, week, and life filled with the hope of joy and playfulness. 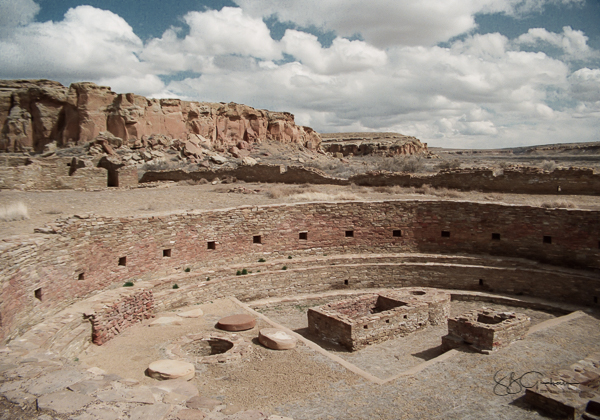 A Found Film Negative from Chaco Canyon, Many Years Ago!

A found film negative – one that I looked for over a couple of years – is something to celebrate! This image of Chaco Canyon was, for many years, the only one of my photographs hanging in the house. A 26×20 inch print remains a fixture in my dining room. Over the years, although long ago, I had given prints as gifts to friends who knew and appreciated the area. This image was taken when Chaco Canyon was just called “Chaco Canyon.” It is now “Chaco Culture National Historical Park” and a UNESCO World Heritage Site.

Several years ago I thought it would be fun to obtain a scan of the 35mm film negative just to play with it in digital form, and perhaps make some smaller prints for other friends. I started going through all the film negatives I could find, which I had never filed in what I now would consider an appropriate manner. I looked everywhere. Film negatives were in multiple places. The negatives were sometimes with different prints. The dates on the folders did not always match the date of the negatives. I had finally given up on finding this particular one, although I found many that I probably should dispose of.

Regular readers here may have noticed I have been on an extended winter break, which will continue on for a bit after this post. (A slight digression – if you visited on January 8 or 9, you may have encountered “the white screen of death.” A Word Press plugin was broken, and I spent much of the evening of January 9 figuring out how to fix this when I could not login to the site, which had gone offline!) In my time off, I have been working hard on decluttering the house, which has taken me into closets and drawers which had not been looked at for some time. Last week – Eureka! – in a small envelope obviously placed in a very safe place, was the negative for this, and three others. The three others were unimportant, they were just attached to the strip that contained this image.

Conversion of a 35mm Film Negative to a Digital Image

I sent the film negative to one of the professional labs I use for large digital prints, not for printing but for scanning. In an email I saw a charge for “mask.” Reading about issues of color in scanning 35mm film to digital, and the use of color masks in the conversion process, interrupted my decluttering. I know a little something about color and digital processing, but this was the first time I really had to stop and think about color in the scanning process. It did make the time seem to go fast, the time I was waiting for the digital CD to arrive.

When the package arrived, I did not open it immediately. That is very unlike me. I set it where I could see it, and continued what I had been doing. After a couple of hours I opened it, and found the four negatives had been separated and placed in their own sturdy envelopes, along with their attached masks. This was all new and interesting to me.

Finally, I put the CD in the computer, and copied the images to a file on my hard drive. I then opened the images in Lightroom. That was the first time I was absolutely certain I had found the 35mm film negative I had been searching for for a couple of years. This is the image of Chaco Canyon that I carry in my head. The image that you are seeing here is one that I “color corrected” to my memory and to the print that has been hanging in my house for years. The color corrected one from the lab was too bright and shiny. 🙂

Working with the image on the computer, I noticed a lot of flaws. Only one can I blame on the age of the negative improperly stored for many years. I had to go look at the print, and I was more than a little surprised that all but one of the flaws I see now were there all the time on the print. I also had to learn at an emotional level something I knew at an intellectual level: film grain and digital noise are two very different things.

Do the flaws in this found film negative change how I feel about the image? Yes and no. I doubt I’ll be making large prints as gifts, and I won’t be entering it for jurying for shows. But this is how I see Chaco, a place I loved from the first time I was there, spring of 1966. It is a place where even people who are not particularly religious feel the spirituality and power of the land. I have been very fortunate to be there multiple times when there were not many other people around. This image reminds me of so much that is very personal to me. I am glad to have it now in a form in which I can work with it. Friends may get small prints, or I may use it on note cards. It represents a part of my life that shaped who I am now. Just a personal bias, but I also like this image as much as any of the images of Chetro Ketl posted on the Park Service site.

If you have never been to Chaco Canyon, it may be hard to imagine the power that this place has, even to a casual visitor. I close with a link to an op-ed piece written by two young people with ancestral ties to the land.