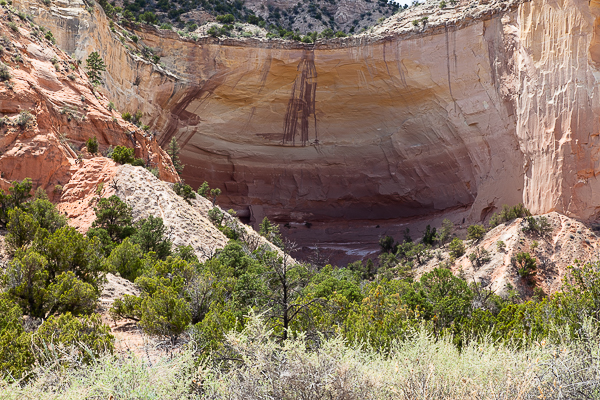 Echo Amphitheater in Northern New Mexico is known for unique echoing auditory properties. We chose it Sunday as the destination point for our drive through the Jemez. The entire drive was breathtaking. As a brief thunderstorm approached, the light on the sandstone cliffs after we rounded Abiquiu Lake was spectacular. So many different layers of colors were visible. On reaching the Amphitheater itself, in shade from clouds overhead, I did not immediately appreciate the colors. They appeared muted.

From the parking lot, a very nice walk leads to the Amphitheater itself.

As we walked in, I was impressed with patterns hollowed out in the sandstone by running water. In addition, I noted small trees growing in cracks, which would, of course, lead to larger cracks and falling rocks over time.

At the very end are stairs. At the top of the stairs is a landing on which you stand in front of the center of the Amphitheater. This is the point for the best echoes. Of course we clapped hands, said “Hello,” and a variety of other things. Things really do echo!!!

We photographed the impressive stains running down the sandstone.

At the time we were there, I thought the stains were probably from iron carried in running water during storms. Today, however, I decided to see what I could find about minerals that might have caused the stains, whether iron, manganese, or something else or a combination. I easily found an overview of minerals in the region. I took this photograph as we were leaving the site.

I have not yet found a scientific analysis of the mineral(s) streaking the sandstone.

However, I did find an Old West myth in the Atlas Obscura:

According to legend the curved stone cliff wall now known as Echo Amphitheater was the site where a group of Navajo executed a family of settlers. As the story goes, the victims were brought to the top of the cliff and killed, their blood running down the cliff wall and permanently staining it. Possibly in response to this legend another story says that years later a number of Navajo were in turn murdered in the same spot, once again staining the cliff wall with their draining blood. Now the natural echoing caused by the site’s geography is often ascribed to the voices of the unquiet dead.

I guess that can serve as an alternative explanation while I continue to search for a scientific explanation. The fact a story like that never occurred to me when looking at the Amphitheater at the time or the images later confirms the thoughts of a friend that my scientific view of the natural world prevents any possibility of a story telling imagination. 😉

Old west murders really are not my thing, but seem to be a recurring theme for some reason this spring. I’m still working through all of the things I have found from simply following things out from the DNA test I did just before Christmas. On my father’s mother’s side, one 2nd great grandfather was William Benjamin McKaughan and my 2nd great grandmother was Charlotte Clarenda “Lottie” Spencer (I guess I really am part Irish and part English). They married in Nacogdoches, Texas in 1852. He purchased properties along rivers in Texas, and became a merchant. In the 1860 Federal Census he had significantly more land and personal property than any of my other relatives at that time. Then came the Civil War, and all of my relatives as far as I can determine were Confederates. I’m still working on swallowing that. They had more children after the Civil War ended. He became known in Dallas for business trips he made after the Civil War. Then, on May 5, 1868 he was murdered. The generally accepted story is that one of Charlotte’s brothers (would be a great grand uncle of mine) killed him over a “family matter” (nothing more specified). The Spencer brothers were also merchants, but I do not know if they worked together or were competitors. But I found one website where someone says quite simply, “His wife killed him and her brother took the rap.” I have no idea, but I am trying to find out more. No one in my family talked about that 🙂 )))))))))) It was new to me!

In the 1870 Federal Census Charlotte was still living in Belton, Texas with her younger children. She did not possess William B’s land, but still had a fair amount of personal property. By the 1880 Federal Census she was living with an older daughter as well as some of the younger children in Nacogdoches, Texas. The 1890 Federal Census burned. In the 1900 Federal Census she was living in San Antonio with my great grandmother, Mary Rosella Mckaughan Webb and her third husband, George C Webb, along with two of her grandchildren – my grandmother and great aunt – and also her unmarried younger daughter, “Mattie” McKaughan. Charlotte died in San Antonio in 1902, and is buried in the Confederate Cemetery there.

When I graduated from medical school, my father’s sister gave me a pair of earrings with the hand written note, “Charlotte Spencer McKaughan, mother of Mary R McKaughan.” No explanation beyond that was given, and it was the only time her name was mentioned to me in any way. William Benjamin McKaughan was never mentioned to me, and on old death certificates of various family members, both my grandmother and great aunt gave false information about his name and place of birth (and they didn’t even tell the same lie!). On one my grandmother said there was “no information” on who her aunt’s mother was, which would have been my grandmother’s grandmother, Charlotte Spencer McKaughan. I guess they figured telling different lies would make finding the truth that much more difficult. It was, and I’m still searching.

What happened to the body of William Benjamin McKaughan? I don’t know. He has a cenotaph memorial in Salado Cemetery, Texas.

Back to New Mexico

For those of you who live here, a day trip through Northern New Mexico with Echo Amphitheater as a destination point is fun. Plan many stops along the way for colorful vistas and photographs. See what your imagination tells you. Thanks for coming along with me on this trip. 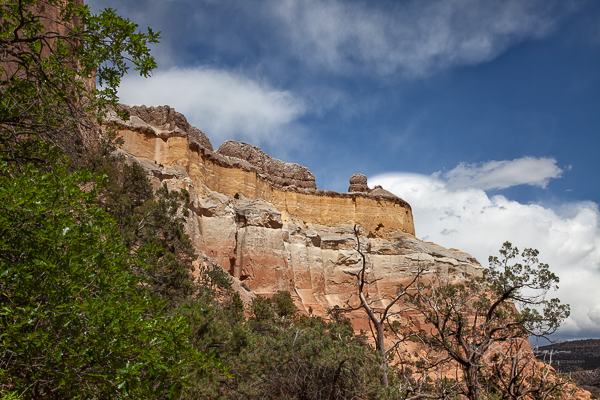 New Mexico: images are better than words. This was a weekend of great company plus beauty, floral on Saturday and landscapes on Sunday.

Saturday was the Fifth Annual Corrales Rose Society Dr. Huey Tour. Time flies!!! You can read about and see Tim Price’s images at his blog, TandL Photos. Days spent with Tim and Laurie in Corrales are always beautiful.

Sunday I had a remarkable day with a photographer friend from Dallas, King Douglas. (Hello to our friends from the old 1X!!!!). Over breakfast we discussed what to do. He pulled out a map and circled a few places. It was clear we were not going to “usual” places. I am so glad. I’m also glad I filled up with gas before I picked him up. We settled on Echo Amphitheater as a destination (photos of that another time). I warned him that I always get rained on in the Jemez, even if there is only one tiny cloud in the sky. The rain came just as we arrived at Echo Amphitheater. It was short-lived, and produced a cool and refreshing afternoon. The magic of the Jemez! We chatted about so many things. And, when we stopped to photograph, I got some tips from a master. What a day!

Finally, for our mutual friends, King Douglas with his wife’s dog, Cooper, in Echo Amphitheater. Cooper is not only adorable, he is an extremely smart Service Dog. He was a great little companion on the trip.

This weekend was full of great company and visual delights. Thank you for sharing what was a remarkable weekend, even by New Mexico standards! 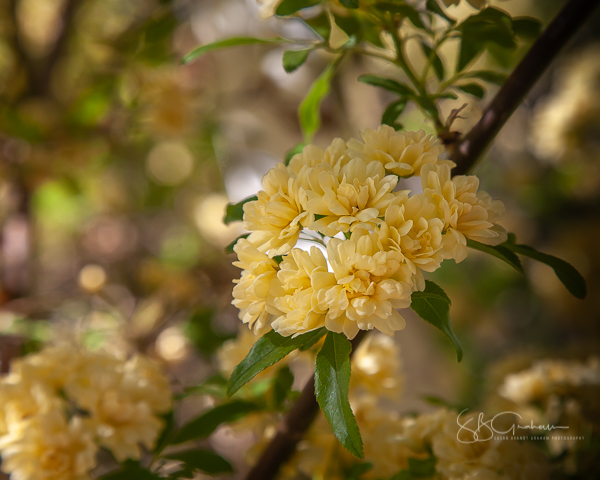 Lady Banks, Laurie, and critters: what more could a day in May need to be perfect? This old species rose was breathtakingly beautiful in the late afternoon light. Many different roses are doing well this year. But this one was spectacular!

Laurie adding to the spirit of the day:

In addition, this little damsel fly seemed to want to be photographed:

Finally, would a visit to Corrales be complete without The Man, Spunk? 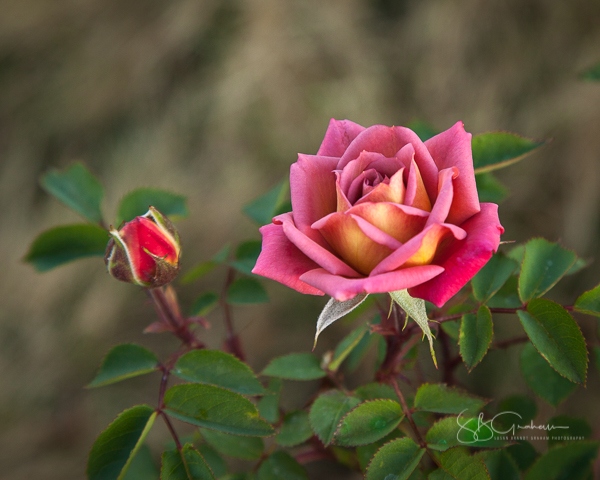 Miniature rose Incognito has long been one of my favorites. In usual years, it produces some perfectly formed blooms. The colors are always amazing. The Albuquerque area had a very mild, dry winter. While that does not bode well for the summer and potential for fires, the spring bloom of roses has been the best I have ever seen here. I’ve been here for over 30 years. This little bloom and bud gave a delightful splash of color. Finally, the bloom had perfect form. 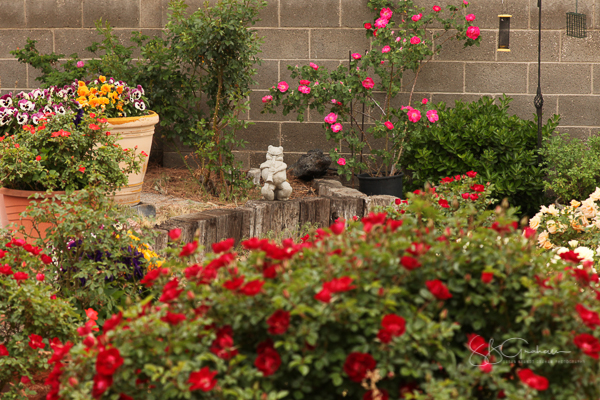 Spring color is everywhere in Albuquerque. Everything looks so fresh. The roses are a couple of weeks ahead of schedule. Because the weather is not hot yet, the roses haven’t become crispy critters, as they sometimes do. Everything around town seems colorful and clean. Of course, nothing beats a sunrise here! A riot of floral color makes things that much better!